With the NBA Playoffs almost here, we ‘re bringing up, possibly, the most debated topic in basketball history. Who is the better NBA player—Michael Jordan or LeBron James? There have been many heated debates about this, so it’s time to dive into it. Let’s get to know each player.

Are You With Team LeBron or Team Jordan?

Born in Brooklyn, New York and grew up in Wilmington, North Carolina, Jordan’s father says he always wanted to outdo everyone but mostly himself. He began college at the University of North Carolina where he helped lead the team to win the NCAA Division I championships in 1982.

Later, he was seen in the 1984 Olympic Games as a team member of the U.S. Olympic basketball team and took home the gold for that year and also in 1992!

He continued his basketball career into the NBA after the Chicago Bulls drafted him 1984. There he was the awarded NBA Rookie of the year and 1st player since Wilt Chamberlin to score more than 3,000 points in a single season! He went from averaging 23.2 points per game to 30.4 in his career and hung up his jersey in 2003. Continue reading more about Michael Jordan HERE.

James was born in Akron, Ohio where he was named Ohio’s Mr. Basketball three times while in high school and had been known as a basketball prodigy since he was little.

He left high school and was drafted into the NBA in 2003 where he played for the Cavaliers, the Heat, and the Lakers. In 2004, he was on the U.S. Men’s Olympic basketball team, and they won the bronze medal. In the 2008 & 2012 Games, he helped his team score the gold medal.

His best individual season was in 2012-13 after he left Cleveland and went to play for the Miami Heat, averaging 26.8 points per game. This is so remarkable for someone who often played away from the basket.

He was also named the finals MVP in the same year even though he didn’t take home the NBA championship title that year. He returned to Cleveland where he played XX more seasons. Then, as a free agent, James decided to leave the Cavaliers again to head on over to the Lakers where we will see what his career will hold. Keep reading about LeBron HERE!

How can you even compare the two players? 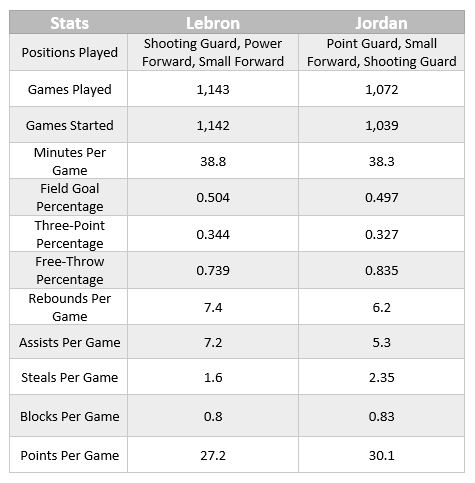 When you compare plain stats, LeBron  has Jordan beat on many. However, it’s hard to compare the two because they  played professional basketball during  different eras. Jordan’s career ended in  2003 just two months before James was  the number one NBA Draft pick. Most  people think you are comparing apples to apples when in reality you are comparing apples to oranges.

The two men play a different style of game in two different eras under different rules. For example, Michael Jordan played during a time when the game was more physical and restrictive for offensive players. Any defensive player could hand-check him without penalty.

Now, what’s to say he couldn’t surpass his points per game career average with NBA’s new rules of no hand-checking and freedom of movement? Not to mention, the three-pointer wasn’t as widely spread as it is now. Needless to say, we can imagine Jordan would have used it more often if it was.

However, LeBron has an advantage on Jordan because people are easily swayed by what is happening in the moment, and right now, that’s LeBron. We live in a social era where everything is displayed in the media, so he gets way more time in the spotlight worldwide. However, with that said he still has raw talent and is the most unselfish scorer in the history of the league.

I am about to break some hearts here…. simply put, neither! You can’t compare apple to oranges! That’s like asking someone if their fudge pop is better than their Popsicle. It’s not pliable. A more realistic comparison would be LeBron vs. Durant or Jordan vs. Bird.

Both Jordan and LeBron are some of the best players to come through the league, but there’s no comparison for the two! Different time, different rules, different game. Simple as that!

What do you think? Click on your choice below and/or leave us feedback in the comments.

Stay tuned to see which player gets the most clicks!

Check out our basketball promotions for this season!